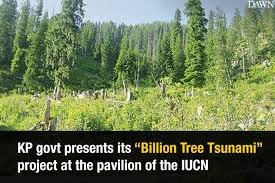 With the departure of all the heads of states gathered in Paris for the UN Climate Conference, Le Bourget is more subdued. As negotiators from around 190 countries wait to start haggling over brackets and commas in the text that will form the basis of a new climate agreement, side-events are where all the action is for now. Pakistan’s Khyber Pakhtunkhwa (KP) government presented their “Billion Tree Tsunami” project at the pavilion of the International Union of the Conservation for Nature (IUCN) on Thursday.

Malik Amin Aslam, who is a former Pakistani Minister of State for the Environment and currently Vice President of IUCN, gave a PowerPoint presentation explaining how the “self-financed” project plans to plant 1.5 billion trees in KP in the next few years. Already thousands of nurseries have been set up and around 100 million saplings have been planted across the province. “We have shifted mindsets in KP; people have started regarding trees as an asset”, he told the packed room. “The youth have been involved in the process and we have also launched a campaign against the timber mafia, seizing illegally cut wood and auctioning it off. This project is instilling hope for a green economy.”

The project has shown enough success to be recognised and registered with the Bonn Challenge, which is a global partnership aiming to restore 150 million hectares of the world’s deforested and degraded lands by 2020. Brazil, Costa Rica, Rwanda are some of the countries that are part of the Bonn Challenge and now the KP government has joined as a sub-national entity. “This recognition by the Bonn Challenge shows KP’s Green Growth Initiative is not a mere slogan but is being followed up on the ground through the backing of a political party (PTI),” explained Amin Aslam.

The Inspector General Forests for Pakistan, Syed Mahmood Nasir, was also at the presentation at Le Bourget and in his view this was a good initiative. “There are no politics in tree planting,” he said. “We all have to do our bit to save the forests of Pakistan.” The IG Forests is part of the 25 members strong Pakistani delegation that will attend the negotiations in the remaining 10 days of the conference. According to Malik Amin, “This initiative shows there is still a lot you can do even if the negotiations here don’t succeed”. In his view, only an accord and not a legally binding protocol will come out of the Paris conference. “A common minimum programme” is how Indian expert Joydeep Gupta, director of the Third Pole Network, described the probable outcome.

“There is far too much pressure not to have an accord – but I’m afraid it will be so minimal that it will be useless. Each country’s domestic lobbies won’t let them move forward; you can effectively add up the Intended Nationally Determined Contributions (prepared by over 160 countries now, including Pakistan) and make an accord and go home.

“Rich countries had promised 100 billion dollars a year in help to developing countries; however the Green Climate Fund that was set up to give out the funding only has 7.3 billion right now. The US has not paid up their commitment of 3 billion.“It is finance that will hold up the agreement in Paris – money is the main thing,” he explained. What will definitely come out of the conference, however, will be a big boost to renewable energy. “Expect all the fireworks to start next week, as the new text will come back from the co-chairs,” he added. For now the halls in Le Bourget remain quiet as negotiators await the text.

Last one month – A pitched battle to stop Imran Khan!

Thanks Dear China. Read below and you might say “ Lakh Di Lanat CPEC Tay”. Even so called friends know that Pakistanis are “Kammi...