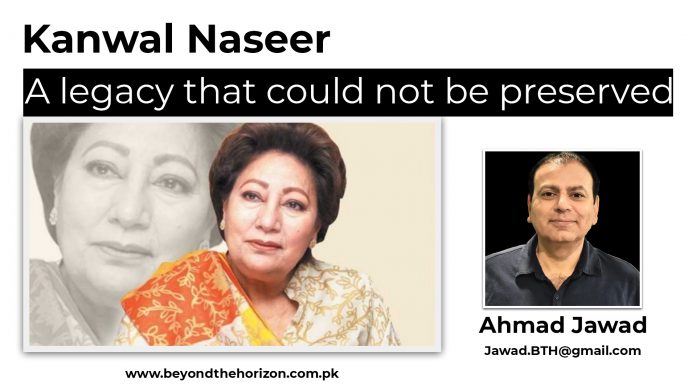 ‏ Serving television and radio while maintaining the highest standard of broadcasting from the first moment of television for the next 56 years is a record that can never be
‏matched and this record is only held by Kanwal Naseer, the legend.

‏An anchor who did not use any english word if she spoke in Urdu, and same was applicable when she was speaking in English or Punjabi. This distinction was only held by Kanwal Naseer. Today we do not have a single example where an anchor could speak in these three languages ​​with equal fluency, pronunciation and without mixing words from other languages, and this example is not limited to female anchors but also to male anchors.

‏ Kanwal Naseer also set a unique example and becoming a role model on screen with her dressing, poise, elegance and personality proving that women can transform their attraction into a graceful, charming personality with dignity, free from the peculiar glamorous imagination of the opposite sex and push a sentiment of respect and reverence. Unique combination of grace, beauty, attraction & respect is something perhaps we could rarely find in show business. Kanwal Naseer was an extinct example of such uniqueness.
‏Now who will teach this art and does anyone want to learn? We lost a unique style, without learning it, without adopting it, without preserving it.

‏ In man’s world, a woman on screen is expected to enchant the viewer with her deep make-up and seductive clothes, and it all turns into a terrifying race where success depends on how well one can enchant the imagination of men.

‏ The metaphor of “Woman of Substance” is getting extinct probably for showbiz and screen in Pakistan.

‏Kanwal Naseer was given the Pride of Performance Award by President Pervez Musharraf while President Mamnoon Hussain presented the Lifetime Achievement Award and also organized an event of tribute in her
‏ honour.

‏ Kanwal Naseer and Tariq Aziz are those artist who were among founders of Pakistan Television and remained associated with television from day one to the next 56 years until they passed away.

‏ In her last days, she played the role of a grandmother for a drama serial, which is currently being shown on a TV channel. Haseena Moeen was writing a role for Kanwal Naseer in her next drama Serial But both left this world within a span of 12 hours.

‏ For many years, Kanwal Naseer’s name was recommended for Sitara-e-Imtiaz, but sometimes the name of another deserving artist was finalized, who genuinely deserved this award, but it was painful when an actress was given same award who had actually worked only in a few cheap and vulgar films. Sitara-e-Imtiaz is a sign of Pakistan’s honour and dignity but when we grant this award based on some cheap & vulgar performance, it speaks how social fabric of our society is damaged. In old movies, we used to see spectators flaunting and showering currency notes on a dancing prostitute, let’s not do the same admiration by granting a prestigious award to similar performance.

‏ If the Sitara i Imtiaz is given to Kanwal Naseer and such other personalities, it makes the award prestigious . If it is awarded to cheap and vulgar performance, it brings down the worth of award and also question the integrity of those who grant such award.

‏ In our show business, the most successful actress was Shabnam who never resorted to vulgar dressing, yet managing her persona with grace and dignity. You will be surprised to know that she was also not considered for Sitar-e-Imtiaz.

We must stop insulting most prestigious national awards of Pakistan with a selection based on private affairs.

If you ever visit PTV, you will find pictures of MDs, Chairman’s, Ministers hanging in the corridors, who headed this institution for a few years and most of them placed in sheer violation of merit & they plundered PTV to make themselves billionaire, yet they appear as the gods of television but a person who was among founding team and served PTV for 56 long years, her picture in the corridors is hard to find. Such is the deficit of empathy.

‏ After burying Kanwal Naseer, I was pleasantly surprised when a wreath was placed on the grave, on behalf of Chief of Army Staff and ISPR Radio. Did anyone in Radio, Pakistan Television, Ministry of Information could come up with such gesture where Kanwal Naseer had worked for 56 years? Comradeship strengthens the roots of institutions. Chief of Naval Staff Admiral Amjad Niazi condoled with Begum Sahiba to Kanwal Naseer’s daughter. Shafqat Mahmood, Shuakat YusafZai, Qasim Suri have always showed compassion and respect on such occasions.

‏ In the circus that has been played in the civil institutions of our country for the last 50 years, the true spirit of institutions has been lost since long time.

‏ Kanwal Naseer, Hasina Moeen, Shaukat Ali have left some silent messages, which must be read and understood, I have made a small effort to decrypt these messages, hoping my words may touch your heart.