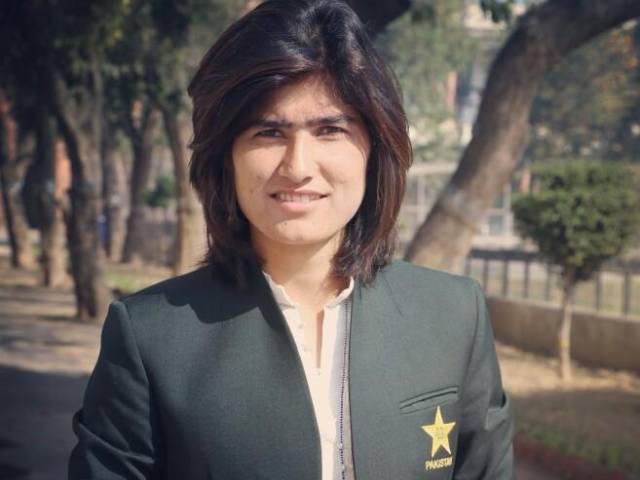 Diana Baig shifts restlessly in her seat, checking her watch every few seconds at an awards ceremony after leading her cricket team to victory. Soon she has to play a football match at another venue, and time is ticking.

Baig is no stranger to the pressure. The talented 20-year-old plays for Pakistan’s national team in both cricket and football, representing the country as one of the “Girls in Green” at the recent World Twenty20 tournament in India in between practicing her penalty shoot-out skills.

“It was an honour to be selected for the T20 squad,” she says, in between glances at her watch.

She did not make the starting team, but being at the tournament — even from the sidelines — was “very encouraging for me — it gave me new life, a new energy”.

The 20-year-old grew up playing street cricket and football with other children in the magnificent Hunza Valley, their makeshift arenas ringed by some of the world’s tallest mountains in Pakistan’s northern Gilgit-Baltistan.

The fact that she was a girl did not matter, she says: Baig belongs to the Ismaili sect of Shia Islam, who are followers of the Aga Khan — infamous in conservative Pakistan for their moderate views.

That largely freed her from the restrictions placed on other, more conservative women in the Muslim country, where her gender is battling for greater freedom.

From the streets, Baig began playing in community events and for local teams, and by 2010 she was leading the newly-formed Gilgit-Baltistan women’s team.

Two years later, she was selected for Pakistan’s A side, and then as a reserve player for the 2013 World Cup. In 2015 she finally won her first international cap, playing for Pakistan against Bangladesh.

But Baig says she had her moments of despair along the way.

“A time came when I could not see my future bright like this,” she admits.

Being selected for the A side changed all that. “After that, I started to work hard.”

Her journey to the forefront of Pakistani women’s football was even more dramatic.

But while playing cricket in Islamabad in 2010, Baig tried out for the Gilgit-Baltistan football team on a whim after friends told her they needed players.

She made into the team and, to her disbelief, in 2014 was selected to play for Pakistan at the SAFF Championships in Bahrain.

She has been a member of the starting 11 as a defender ever since, she says, unable to hide her excitement.

Baig has had to fight harder for her cricket career.

Unlike in men’s cricket, Pakistan’s women’s players are not contracted and are selected on a match by match basis from lower-ranked teams, such as the several hundred playing at the provincial level.

That means that there were times when Baig was in — and times when she was out.

Fighting to keep her place was complicated by the fact that — again, unlike the men — Pakistan’s women have no regular facilities or practice time, meaning Baig was forced to rely on training with her university team to keep up to international standard.

But her selection for the World T20 meant the hard work on the playing fields at the Lahore College for Women University had paid off.

“It is because of this college, this ground, because regular practice is very important,” she says.

Now Baig is fighting to maintain a crucial balance between her sporting dreams and an education.

“It becomes very hard,” she says.

“I try to start from football… I play football in the morning, then our cricket training starts around 11 or 12 noon and continues until 3:00 pm or 4:00 pm.”

After that, she says, she heads to her university hostel for food and drink. “I start studying during the night, continuing until late.”

Women’s cricket is growing in popularity in Pakistan, she says, with corporations such as mobile companies increasingly arranging sports events.

The women’s team received unprecedented support from Pakistani fans disillusioned by the men’s dismal performance during the World T20 in India, with the hashtag #GirlsinGreen trending.

With cricket taking up more and more time, her studies — she is on a full scholarship at the university, where she is in her first semester of a health and physical education degree — are suffering, Baig admits. “But one has to manage it.”

Though determined, she knows that one day she will have to choose.

When asked which path she will take, she laughed.

“You know, in Asia, there is more charm in cricket,” she says, acknowledging her playing for the football team is the harder road.

She adds: “I see my future better in cricket.”