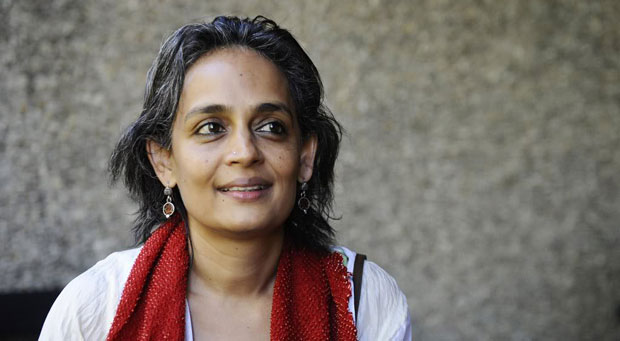 Sanity takes birth as soon as insanity grows. Arundhati Roy is voice of sanity against the insanity of Modi & Ajit Doval.

“I write this from Srinagar, Kashmir. This morning’s papers say that I may be arrested on charges of sedition for what I have said at recent public meetings on Kashmir. I said what millions of people here say every day. I said what I, as well as other commentators have written and said for years. Anybody who cares to read the transcripts of my speeches will see that they were fundamentally a call for justice. I spoke about justice for the people of Kashmir who live under one of the most brutal military occupations in the world; for Kashmiri Pandits who live out the tragedy of having been driven out of their homeland; for Dalit soldiers killed in Kashmir whose graves I visited on garbage heaps in their villages in Cuddalore; for the Indian poor who pay the price of this occupation in material ways and who are now learning to live in the terror of what is becoming a police state.

Yesterday I traveled to Shopian, the apple-town in South Kashmir which had remained closed for 47 days last year in protest against the brutal rape and murder of Asiya and Nilofer, the young women whose bodies were found in a shallow stream near their homes and whose murderers have still not been brought to justice. I met Shakeel, who is Nilofer’s husband and Asiya’s brother. We sat in a circle of people crazed with grief and anger who had lost hope that they would ever get ‘insaf’—justice—from India, and now believed that Azadi—freedom— was their only hope. I met young stone pelters who had been shot through their eyes. I traveled with a young man who told me how three of his friends, teenagers in Anantnag district, had been taken into custody and had their finger-nails pulled out as punishment for throwing stones.