Since January: Over 50 cars, bikes stolen in capital

As street crime continues unabated, the capital has seen a corresponding rise in the number of vehicles being reported as stolen in Islamabad.

According to data shared by Islamabad Police, since the turn of the year at least five cars and motorcycles were reported stolen in the capital every week on average.

Cars, more than motorbikes, were reportedly targeted by lifters with police noting that 30 cars and 21 motorbikes had been stolen from the capital during January and February.

The data showed that the Sabzi Mandi area was a hot bed for car lifters with as many as 11 cases of auto theft (six cars and five motorbikes) registered in the past two months.

But, police in Banigala, Margalla, Golra, Shalimar, Ramna, and Nilore did not report a single case of vehicle theft since the beginning of the year. 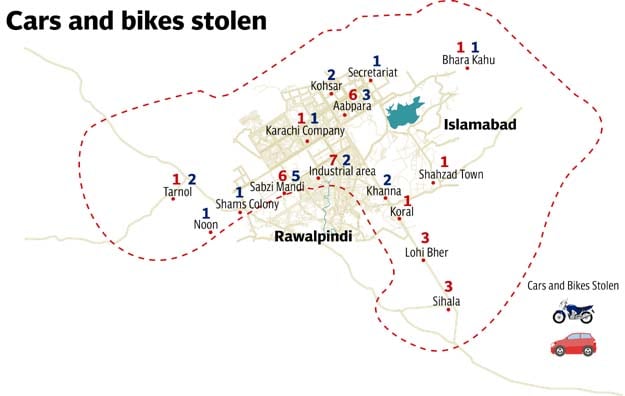 Yet, the actual number of stolen cars and motorcycles may be higher since not all the cases are reported or registered by the police immediately.

On February 24, Sabzi Mandi police had registered a car theft case over three years after the incident had taken place and reported to the police.

An auto-theft victim told The Express Tribune that a network of private contractors help owners locate stolen vehicles for a hefty fee.

While around 50 vehicles were reported as stolen in the capital, police said they had recovered 10 stolen cars and six motorcycles.

Moreover, police said they had recovered a host of tampered vehicles.

For the last couple of months, police have also been carrying out a crackdown against motorcycles which were being driven without proper documents in a bid to control street crime and auto theft.

Separately, the police’s anti-car lifting cell (ACLC) has also been working to track gangs of car lifters in the capital.

However, the crime remains  challenge for police who have set up several snap-checking spots and pickets around every intersection of the city, in addition to round the clock monitoring through hundreds of security cameras under the safe city project.