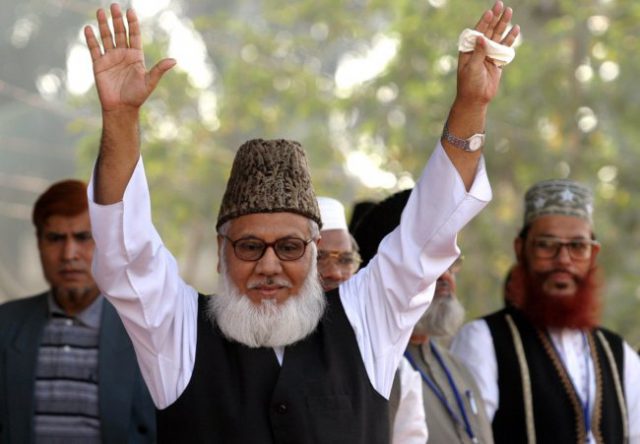 Vacuum of Leadership is so big in Pakistan that every day gives us a reminder. Today’s reminder: Tayyip Erdoğan doing what Nawaz Sharif could do. So painful to see incompetent & insane ruling elite & political leadership in Pakistan. Ahmad Jawad

Motiur Rahman Nizami, leader of the Jamaat-e-Islami , was hanged at a Dhaka jail late Tuesday for the massacre of intellectuals during the 1971 independence war with Pakistan.

The Turkish foreign ministry had already strongly condemned the execution, saying it did not believe that “Nizami deserved such a punishment”.

It said that Turkey, which has abolished capital punishment, feared that the use of such methods risked creating “rancour and hatred between our Bangladeshi brothers”.

Since coming to power in 2002, Turkey’s ruling Islamic-rooted Justice and Development Party (AKP) has sought to boost the country’s power in the Muslim world well outside its Ottoman sphere of influence.

Nizami, a 73-year-old former government minister, was the fifth and the most senior opposition figure executed since the secular government in the overwhelmingly Muslim nation set up a controversial war crimes tribunal in 2010.

Turkey had last year also furiously slammed a death sentence handed to Egypt’s deposed Islamist president Mohamed Morsi who was a close ally of Ankara until he was overthrown by the military in 2013.