Why & How – Read full story

I have never seen a public transport of few hundred buses plying on a dedicated road running through the congested roads of city & blocked by heavy grill (Jungla) from both sides. Even city trains(Trams) pass through the standard roads & equally used by pedestrians & other transport. What I understand from this logic of not having dedicated roads for any public transport is to have maximum utilisation of limited space available within cities for all types of transport & pedestrians. 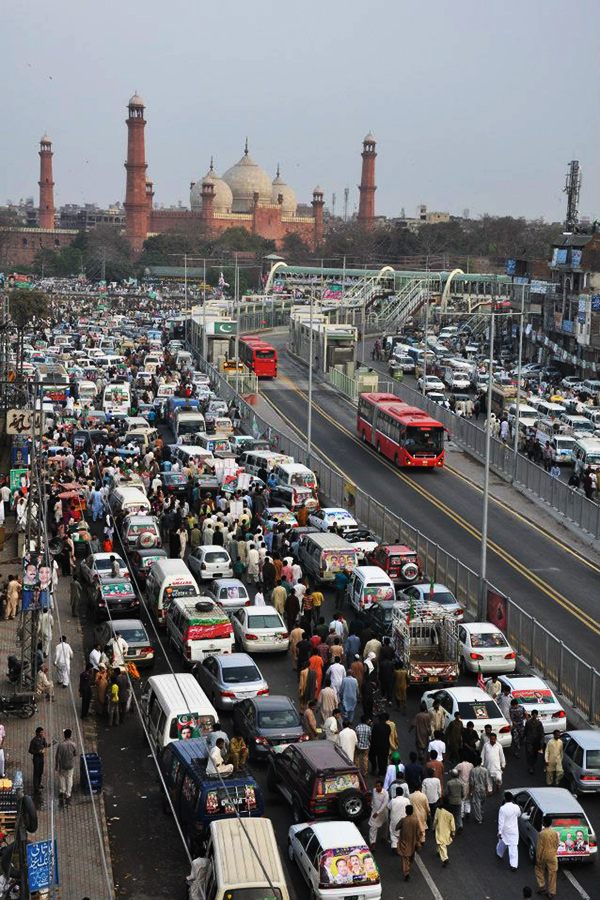 A picture of a road filled & choked with traffic on a Lahore road next to an empty Metro bus road is probably a good explanation of above logic.

What is drastically wrong in case of Metro transport in Lahore & Rwp/Islamabad is construction of dedicated roads for few hundreds buses.  Such metro roads remain highly under utilised roads by any standard. It’s like 2 Million people availing Metro are having free corridors while 10 Million people are stuck in traffic right next to each other. A standard road is used by any type of transport including Bicycle, Motorcycle,trolley, Rickshaw,Truck, bus,vans, cars, Taxis, pull carts & even pedestrians. Who travel on these standard roads? Everyone from a beggar to a rich man travel on these roads.

Metro Pakistan is a unique design of wasting resources in the entire world, only genius from a sharif family can design such rare concept of public transport.

We don’t need to reinvent the wheel, when whole world has reached to efficient models of public transport after various experimentation.

Another impact of such design fault resulted into dividing the city into parts. You can see the other side but you need a big effort to reach other side. I simply cannot digest such a major design blunder. One has to be crazy enough to create such a design.

Such image of Metro alongside a standard route stuck with traffic speaks volumes of grossly flawed system conceived by Punjab Government.

We normally conclude our blunders with the sentence

God will not help those who cut their own feet by own choice and not ready to learn from mistakes.

As you sow, so shall you reap is my conclusion on Pakistan.